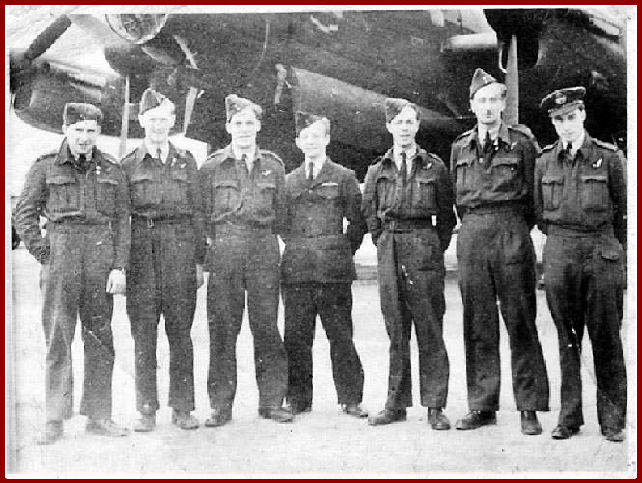 The regular crew of Lancaster ME.699.T 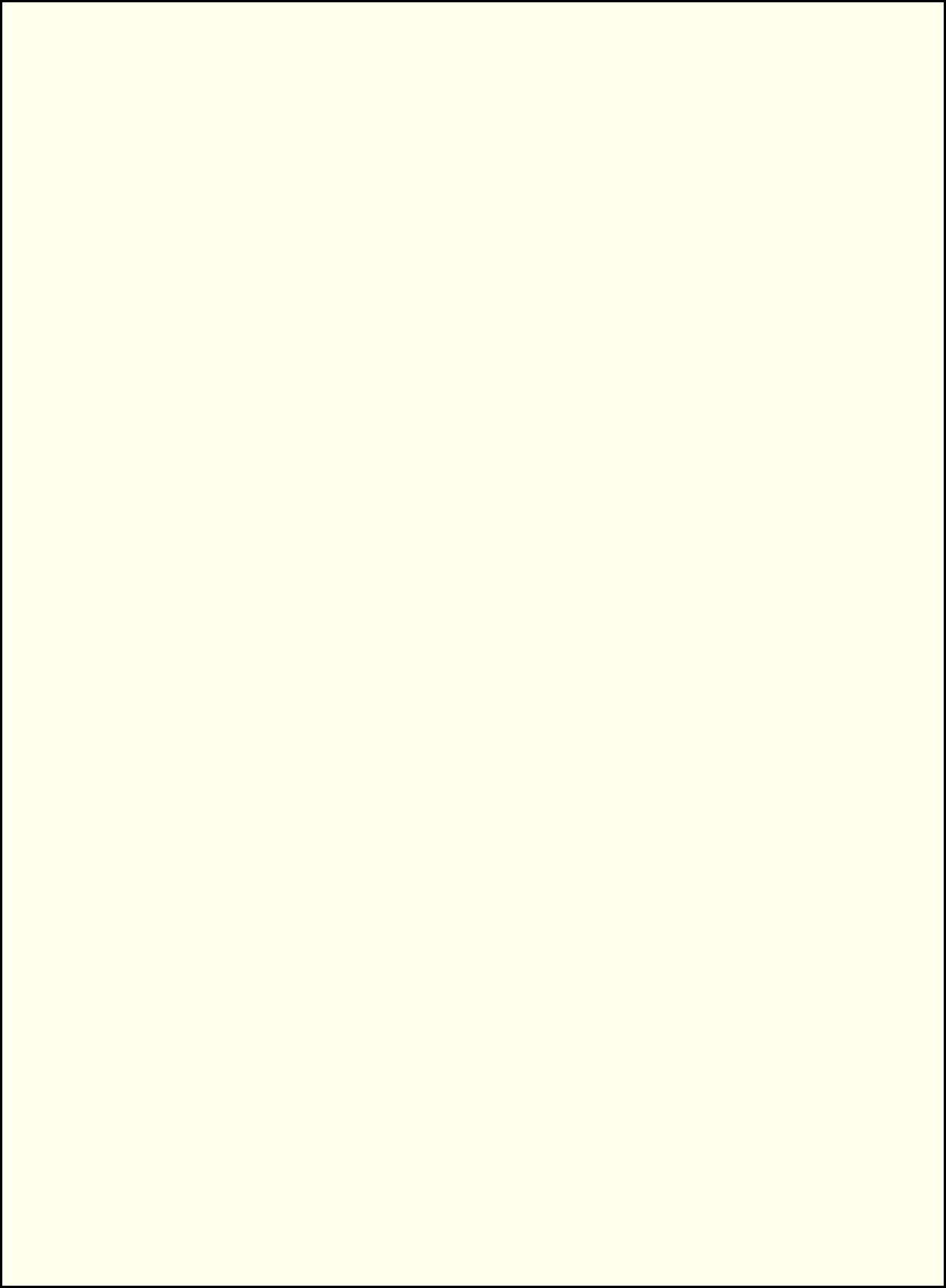 
Steve Darlow describes the mission that night in some detail in chapter 10 of his excellent book on the battle against the V1 menace, "Sledgehammers for Tintacks".

The raid on the V1 storage and assembly areas in the caves at St Leu d'Esserent on the 4th/5th of July 1944 was the first of several as the RAF attempted to stem the attacks on southern England by the V1
rocket, or Doodlebug as it became known. The details that follow are taken from that book, published by Grub Street.

The Allies had been aware of the potential threat from V1 flying bombs at England since early 1944 and Operation Crossbow was the RAF's mission to counter the threat. By the end of June 1944 the Germans
were launching over 200 of the bombs a day at southern England from various sites scattered across northern France. The RAF carried out many raids on specific launch sites but it became clear that there must
be a central assembly and storage area where the bombs were coming from.

The Special Operations Executive (SOE) submitted a report suggesting that the natural limestone caves in St Leu d'Esserent, just north of Paris were being used for this in March 1944, but it wasn't until June
that further intelligence pointed to the site and the caves, which had previously been used for growing mushrooms, were targeted.

On the 29th June the Germans launched the 2,000th V1 at England in what was a dangerous campaign to try to wear down the morale of the British population for the continuing fight against the Nazi's.
The first raids on the caves at St Leu d'Esserent were by American daylight forces in late June. These caused minimal damage but further intelligence gleaned in intercepted communications confirmed that the
site was a major base for V1's and the site was set as a target for a major raid by the RAF's 5 Group on the night of the 4th/5th July.

The diary section at the RAF Bomber Command History site records that 246 aircraft made the main attack, with 19 aircraft from 617 Squadron making a separate initial sortie on the target with specialist bombs.
With clear skies and bright moonlight forecast the raid was planned to provide maximum deception for the main force with diversionary raids on railway junctions at Villeneuve and Orleans in an attempt to draw
off the night fighter force. The raid proper on the caves at St Leu d'Esserent was led by the famous Dambusters, 617 Squadron, who would attack with 12,000lb "Tallboy" bombs to try to collapse the caves,
followed immediately by the main force to bomb the area with 1,000lb bombs.

At 01:30 Wing Commander Leonard Cheshire leading 617 Squadron in a Mustang marked the target for the rest of the squadron. 11 Tallboys were dropped with the remainder of the squadron unable to site the
target accurately due to smoke, then the rest of the force attacked almost immediately afterwards. Thirteen aircraft failed to return from the mission (5.3% - above average losses even then), one of them being
Ronald’s 44 Squadron Lancaster ,ME699- KM-T. Of the losses that night Bomber Command put eight down to fighters, two to flak and one to flak and fighters. The remaining two were lost to unknown causes.
In all seventy-seven men died in the raid with eight more taken as POW's. Nine men evaded capture. Fourteen more Lancasters were lost in the diversionary raids on Villeneuve and Orleans and seventeen
German aircraft were shot down in return on that night.

According to 44 Squadron’s Operations Record Book Ronald’s aircraft was 1 of 14 from Dunholme Lodge to take part and Creill is mentioned as the target for the mission, his aircraft was the only one not to
return and was recorded as “missing without trace, no signals were received”.

The regular rear gunner for the crew, Bob Routledge, should have flown that night but was taken ill at the last minute and was sent to hospital after a pre-flight medical check and replaced by Ronald Houseman.

It is believed that ME699- KM-T was the fifth Lancaster downed by German night fighters on the raid on St Leu d'Esserant when it was shot down by a ME 110 night-fighter over Beauvais. The German night fighter
claim for KM-T states the time of the kill as 01:49 on the 5th of July 1944, and names the pilot of the aircraft as Unteroffizier Gunter Schlomberg. Schlomberg was with 3./NJG3, a night-fighter unit based in
Vechta In northern Germany. German controllers had directed the night-fighters to the channel on detecting the raid coming in and the fighters followed the bomber stream across France and towards their target.

At some point after the St Leu bombers attacked their target and turned for home Schlomberg attacked KM-T while it was flying at 2,500m above Beauvais. German records show that Unteroffizer Gunter
Schlomberg was killed and Unteroffizer Otto Wagner was wounded when their aircraft crashed near Cruxhaven. near Hamburg, on 11th August 1944. The cause of the crash is not known. Their aircraft when they
crashed was Bf110 G-4, D5 + LL, works number 140339.

With ME699 fatally hit by Schlomberg's night fighter shortly after dropping its load of 1,000lb bombs on target, the pilot, PO Bill Young ordered the crew to abandon the aircraft. The hatch at the front of the
Lancaster was right below the bomb aimer's position and on such an order the bomb aimers job was to open the hatch and “get the hell out”, making space for the rest of the crew.
John Wainwright was first out, followed by the flight engineer Sergeant Bill Robinson before the plane plunged to the ground and exploded, killing the other six men on board. The Aircraft came down in a small
hamlet called Laversines a couple of kilometres East of Beauvais 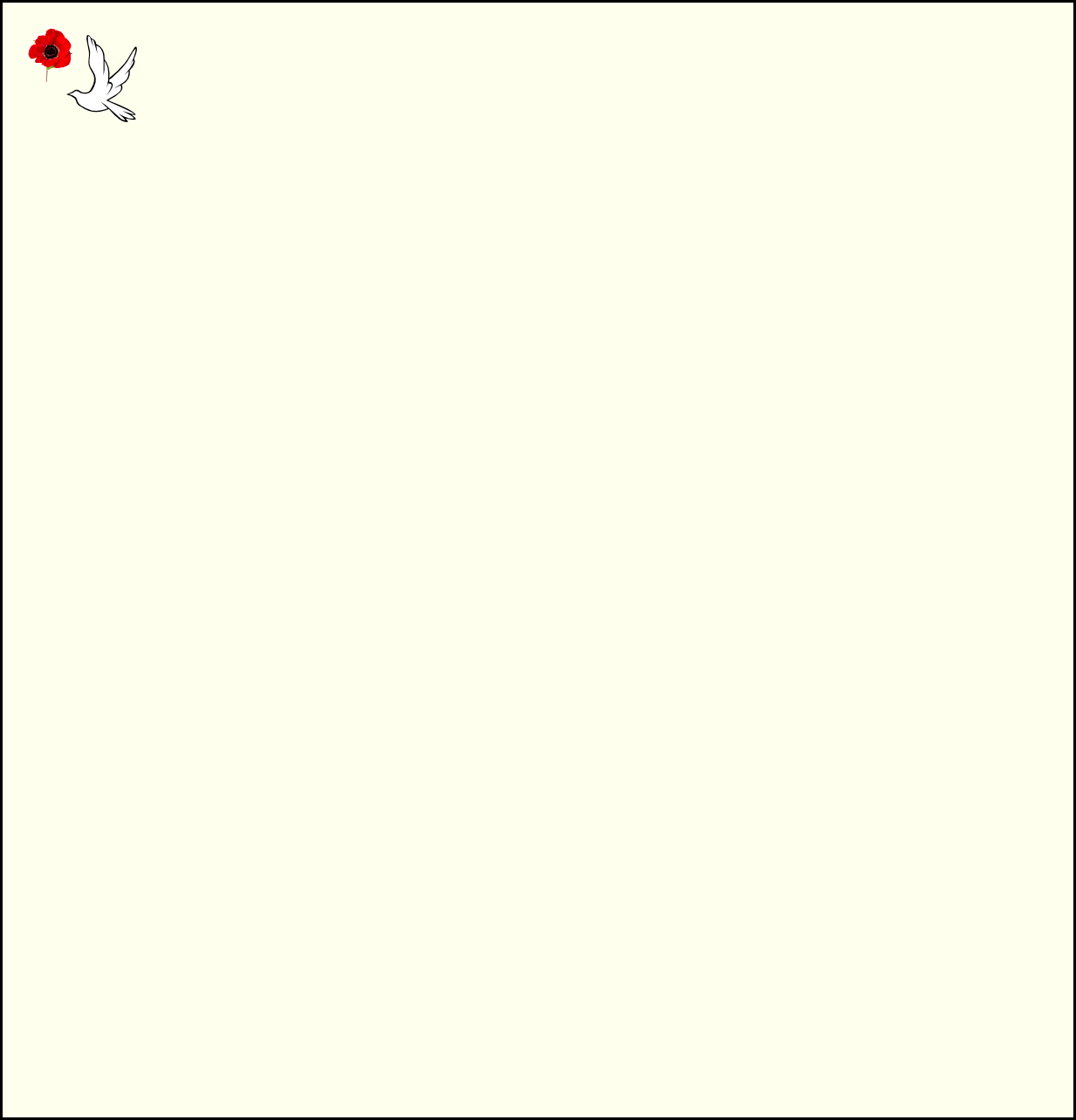 Sergeant (Air Gunner )
Ronald Houseman
died on the
5 July 1944
Aged 20
whilst serving with the
Royal Air Force Volunteer Reserve
He is buried at the Marissel French National
Cemetery
Location: Coll 284 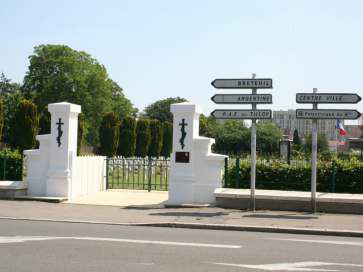 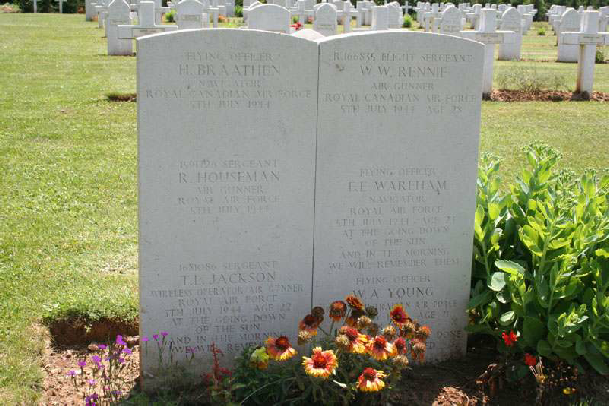 Beauvais was a French hospital centre during the war. The French National Cemetery
was made in 1922. There are 19 Commonwealth burials of the 1914-18 war and 158 of
the 1939-45 war commemorated in this site. Of these, 4 from the 1939-45 War are
unidentified. The British graves, from the 1914-18 War, came from
:- BEAUVAIS COMMUNAL CEMETERY EXTENSION, BEAUVAIS, CEMPUIS and
GRANDVILLIERS FRENCH MILITARY CEMETERIES.
The grave of the crew of Lancaster ME.699 KM-T : 44 Squadron 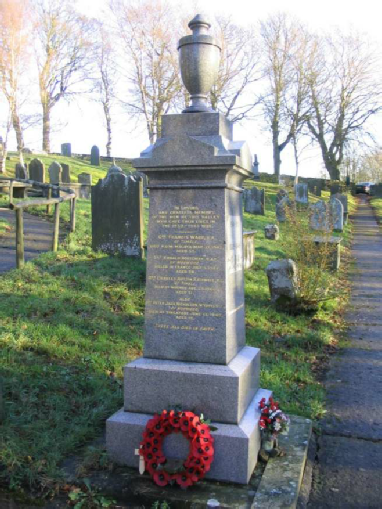 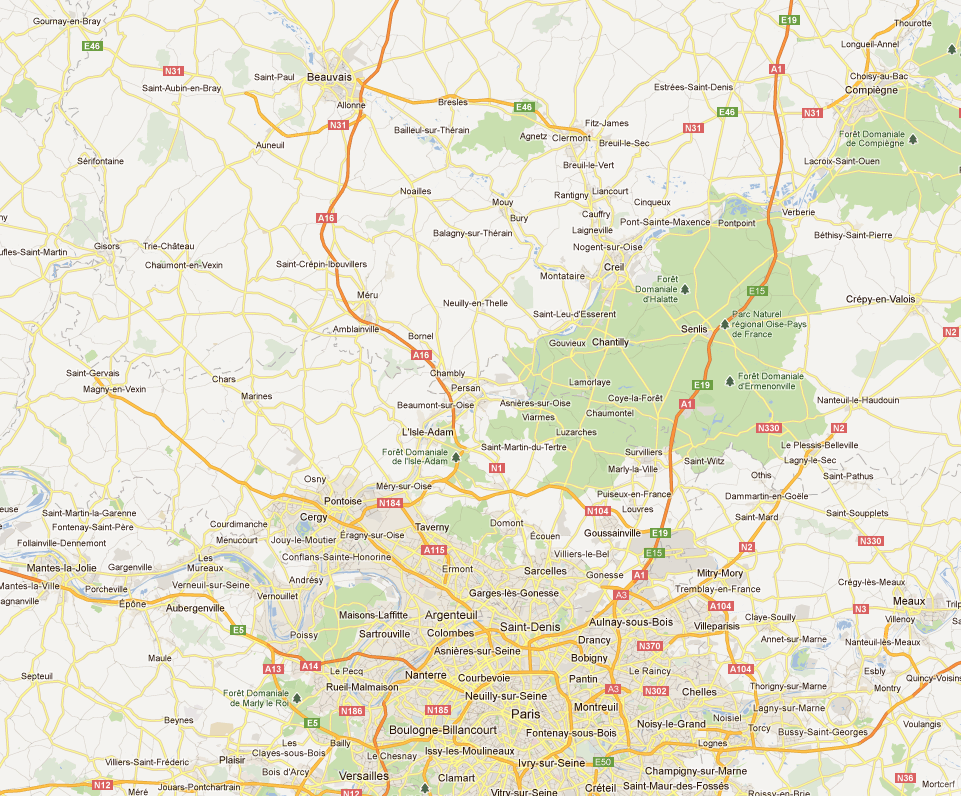 Laversines - this is where Ronald Housemans’s
Lancaster Bomber crashed on the 5th July 1944
after being shot down by German fighter aircraft. 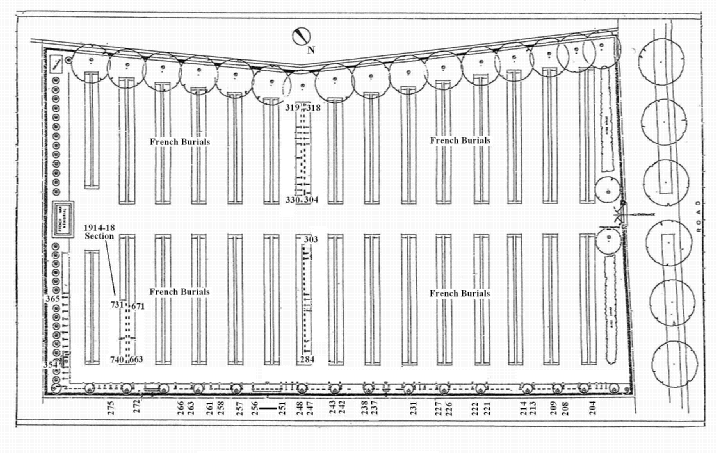 Marissel French National Cemetery
Sergeant (Air Gunner) - service number 1591726
44 Squadron
We do not have Ronald’s service record but from 44 Squadron’s Operations Record Book we know that Ronald was posted to 44 Squadron based at Dunholme Lodge on the 21st of May 1944 from
51 Base ( RAF Swinderby), presumably after training.

According to the 44 Squadron’s Operations Record Book Ronald took part in two successful missions before that fateful one on the 4th/5th of July.

1 - A bombing mission to attack a V1 flying bomb site at Pommereval in northern France as part of a 15 strong formation of aircraft. He left Dunholme Lodge at 22.28 hours on the 24th of June and returned
at 03.15 hours on the 25th.  His aircraft was a Lancaster Mk 3, number ND.517.U.
2 aircraft on the same mission were lost without trace.

3 - According to the Squadron Operations Record Books,on the night of the 4th of July 1944 at 23.00 hours Lancaster Mk 1 serial number ME.699, squadron designation KM-T,  took of from Dunholme Lodge
with an 8 man crew as part of a 14 strong formation of aircraft, on a mission to bomb Creil in northern France. We know from information provided by Mike Wainwright (the son of bomb aimer F Sgt J E
Wainwright) that Ronald Houseman replaced th regular rear gunner Sgt Robert Routledge at the last minute when he was taken ill.
According to information provided by Mike Wainwright and also from the book RAF Bomber Command Losses of the Second World War by W R Chorley (Intelligence reports filed with Bomber Command
Papers) that the actual target that night was St Leu d’Esserent in northern France.

The aircraft and 6 of it’s crew were not to return, the only aircraft from 44 squadron lost that night.

The aircraft on the night of the fated mission was a
Lancaster Mark I - number ME.699-KM-T

NOTE: Ronald Houseman’s name does not show on the record as he replaced Sgt R Routledge
at the last minute.
44 Squadron Operations Record Book for the 24th/25th  June 1944

NOTE: Ronald Houseman’s name does not show on the record as he replaced Sgt R Routledge
at the last minute.
The grave of the crew of Lancaster ME.699 KM-T : 44 Squadron